This article continues from the last article, Introduction to Resonance. If you need to review standing waves, nodes, and antinodes, you might want to check out that article first. Otherwise, let’s get right down to business.

How to Find Resonant Frequencies

Remember from the last article that standing waves happen when nodes or antinodes line up with the ends of a rope or pipe. Such standing waves create resonance. The lowest frequency that “fits” on a string or in a space (if we are talking about sound waves in air) is called the fundamental frequency. All higher resonant frequencies (called harmonics) are multiples of the first fundamental frequencies. Which harmonics you get depends on whether the end conditions of the wave are fixed or free.

However, the equation for finding the first fundamental differs between same-ends and different-ends conditions. The equations are presented below in the table. In the equation

is the fundamental frequency,

is the speed of the wave in the medium (speed of sound for waves in air), and

is the length of the string or pipe.

Notice that the same length of rope or pipe can produce a different fundamental frequency depending on end conditions. A cylindrical pipe with one open end and one closed end will have a lower fundamental frequency (by a factor of 2, in math terms, or an octave, in musical terms) than the same pipe with two closed or two open ends. The picture below gives a graphical representation of why this is. 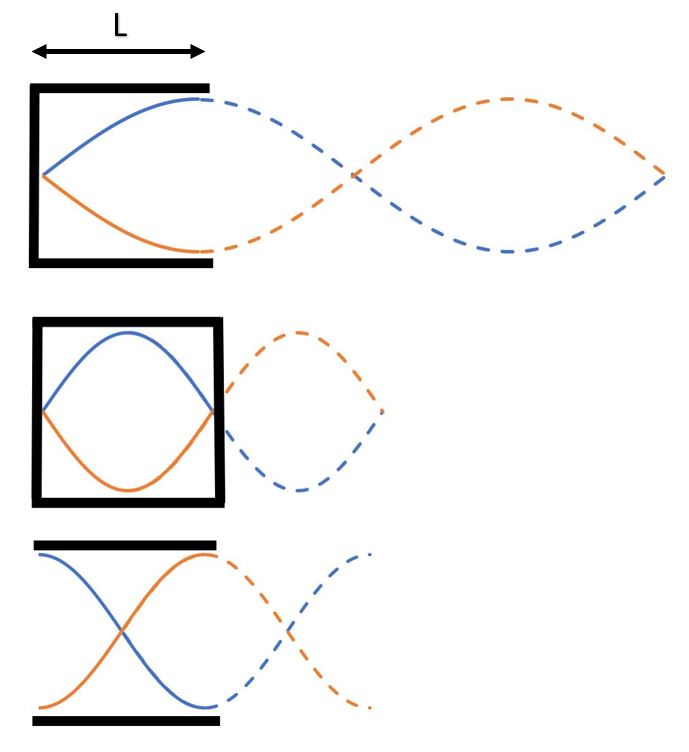 The principles discussed in this article can be used to model many different things. The ear canal is often modeled as an open-closed pipe. Most musical instruments that use strings or pipes—organs, clarinets, harps, guitars, and violins, to name a few—can be modeled with the simple equations in the table above. Pretty powerful, right?

If you don’t want to do calculations by hand, you can use our handy-dandy Fundamental Frequency Calculator to do the math for you. Or, since you now know all about standing waves and resonant frequencies, you can do the math by hand and impress your friends.