Anatomy of a Sound Wave

When most people hear the word wave, they immediately think of ocean waves. While there’s nothing wrong about thinking about a sunny day at the beach, in terms of acoustics, the kind of waves you see crashing on the sand are not like most sound waves. In fact, crashing ocean waves are like the complicated nonlinear waves you find in a sonic boom situation.

Sonic booms may be cool, but if you want to understand sound waves, it’s best to start from something a bit simpler.

Sound waves are a type of mechanical wave. Like other mechanical waves, sound waves move energy from one place to another through a medium. As the particles that make up the medium oscillate, they knock against one another, passing energy along. It’s kind of like the chain reaction that happens when a line of dominoes falls.

Sound travels as a longitudinal wave. A longitudinal wave is a mechanical wave where the particles in the medium move in the same direction as the energy of the wave. Dr. Daniel A. Russell at Penn State University has made a great animation that shows sound waves passing through a medium. You can notice how the individual particles of the medium rock back and forth parallel to the direction the wave is traveling.

Also notice that as a wave passes through a medium there are places where the particles bunch up and places where the particles spread out. The bunched-up parts are called compressions and the spread-out parts are called rarefactions. If you could see air particles moving as a sound wave passed through, they would look a bit like an accordion—bunching up and spreading apart at superhuman speeds. 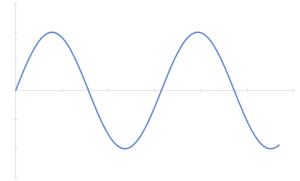 By representing a sound wave as a sine wave, several useful components of a wave can be identified. The point halfway between the highest point and the lowest point of a sine wave gives a point of equilibrium. If the point of equilibrium is set to zero, the height of the wave—called its amplitude—can be measured. Also, the distance between two corresponding points on the wave, like two adjacent valleys, can be measured to find the wavelength of the sound wave. 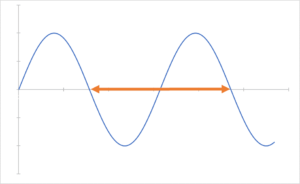 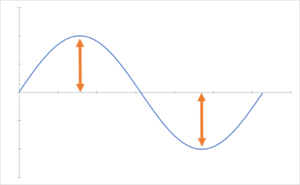 These basic pieces, wavelength and amplitude, together with time, form the mathematical basis for determining almost all other information about a sound wave. With an understanding of how the physical anatomy of a sound wave is represented mathematically, you are ready to take a dive into the broader ocean of acoustics.